what's this? It needs a patch? Sure.

at current speeds, should be downloaded sometime next tuesday. I hope my 14 day trial starts from when I can actually *play* the damn game. 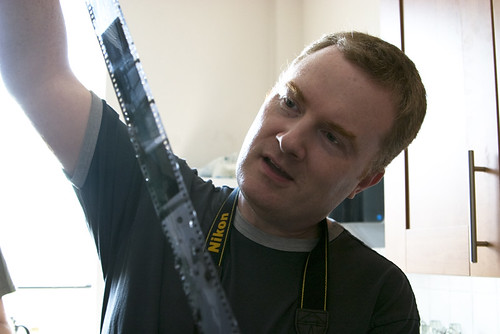 taken by the lovely

saturday - took LB to her dancing class, chatted to one of the other dads there who had just been out for a 13 mile run, got all inspired to start running again.

Back home, quick lunch, took LB to her friend's birthday party. Theme was ballerinas and knights.

LB couldn't decide, so went in a tutu wielding a sword and shield. Good girl.

Back home, picked up EB and took him into town to buy a new bike - his old one is really really small and he's got a ton of money in his savings account.

Home again crashed in front of telly at about 10, early night.

Woke up at 9am this morning, which is about an hour late as I was supposed to be taking EB to his climing club. Didn't happen, he didn't want to go anyway.

Off to Ikea (by myself! yay!) to buy some bookshelves and a new desk. New desk involved finding someone to order it from, pay for it and drive to their other warehouse bit (ok, just round the back, but frankly I couldn't be arsed at that point). Much cursing and swearing and trying to get two HUGE boxes into the car. That's after I realised I'd parked on the other side of some silly barriers which are there to stop you getting a trolley through. I unloaded the trolley, pushed it through the barrier and reloaded it. HA! TAKE THAT, IKEA!

Ahem. where was I?

Which involved unloading existing shelves, reassembling them in LB's room and then assembling new shelves.

Only did one. Knackered.

Kids finally in bed, watched I'm Sorry I Haven't A Clue (recorded from last night on BBC4 - it's on iPlayer if you want to watch it). Then upstairs to do some 'puting.

yup. The world *has* gone mad.